Ahem. Yup, I know, I’m really good at blogging. As evidenced by my lack of actual…well… uh, blogging. But HERE I have a shiny new post for you! *pets the computer*

We moved in December. We bought a house and acknowledged that while we live in a state we’d never really given much thought to as California kids (and I’m using the ROYAL WE to indicate me and the Major), we were now just going to go ahead and stay here. Thanks, Marine Corps! I’m sad about it a lot because ALL of our family is about 3000 miles away, and they’re missing a lot of the kids growing up. I talk to friends who get to have Sunday dinners with the grandparents, or go shopping with their moms… and, well… that isn’t what we’ve got happening here. But we got about three times more house than we’d ever be able to afford in California. Plus… water. Around us, falling on us all the time. No drought here, which is good because green makes me ridiculously happy.

I told the kiddos that I’d give each of them a room overhaul twice. Once NOW, and one when they decide their NOW rooms are too young for them. So the next couple postitos will be about their rooms.

I have to give a shout out to Jackie Hernandez at Teal and Lime (SUCH a fun blog!!) because I blatantly COPIED her playroom wall for Lunchbox’s pirate room.

So when we moved in, it was clear the room had been painted a few times. Once red, as evidenced by the splats on the ceiling, and once…black? Maybe? So when we got it, it had lots of primer on the walls to cover that stuff up. And it was pretty blah. But with two windows, it’s got great light. Sometimes I’m jealous — I think Lunchbox got the best room in the house!

So I knew we wanted pirates…and I was so inspired by Teal and Lime, I took her playroom wall and used the waves on three walls, replicating the mural over LB’s bed. 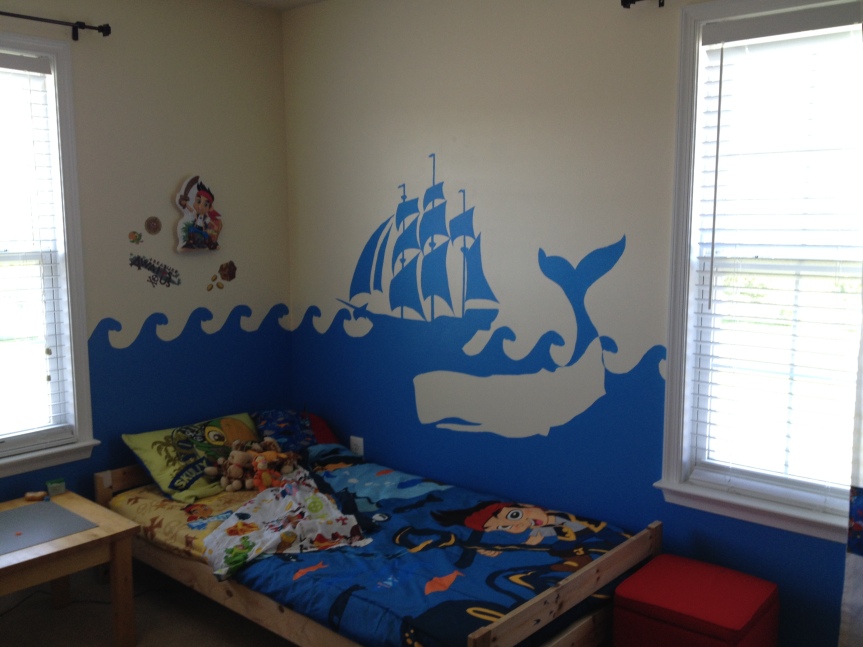 You may notice a bit of a Jake and the Neverland Pirates theme here… that was a requirement. Over the bed is a Jake nightlight that has a remote control and talks, and some Jake decals that LB can stick on and peel off. More on that soon!

I took the waves around three walls, using a creamy Valspar Signature Churchill Hotel Navajo White in eggshell for the upper half of the wall and inside the whale. This color got used pretty much everywhere in the house, so now I have some for touchup in other places!

On the remaining wall, I wanted to do something with chalkboard paint, and give LB a place where it would actually be OKAY to write on the walls… thus, the octopus! 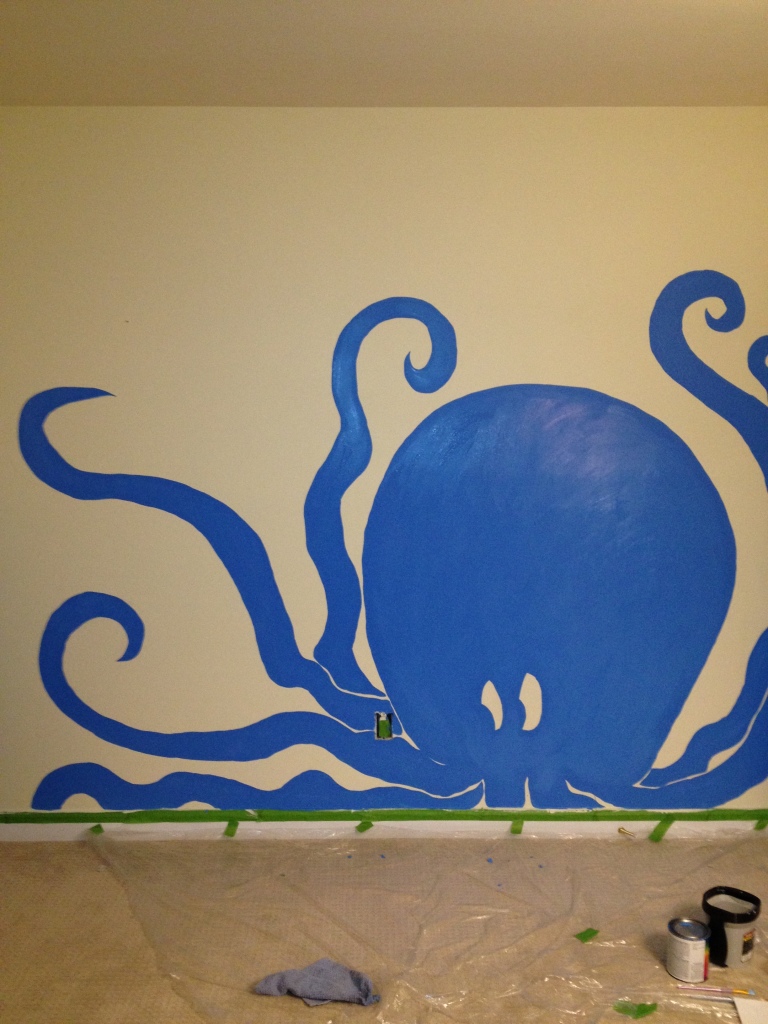 This guy was just freehand — his arms and legs are nice and loopy/wavy, so it was pretty easy to just go with the flow. Here I had them tint the chalkboard paint in the same color I used for the ship and waves — Valspar Signature in Splish Splash. The waves are an eggshell — this was just the tintable chalkboard paint from Valspar (all at Lowe’s!)

The result, once I put the bookshelf back up and everything, is pretty fun! I hung an IKEA bucket filled with chalk on the shelf next to the octopus: 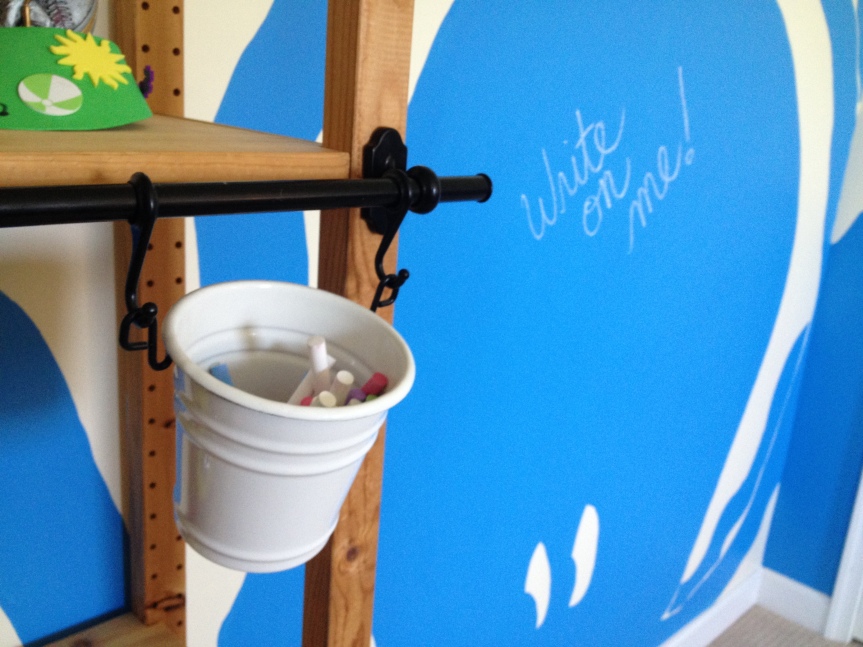 And once the walls were done, I had those two windows to think about. And here’s where Jake is involved again. I picked up about two yards of fun Jake and the Never Land Pirates fabric at Joann’s (on sale, yay!), some plain white duck cloth that was super cheap, and some FolkArt textile medium  to use with my acrylic paints. There was a bit of sewing involved here, but not much. Oh, and I grabbed some of these grommety 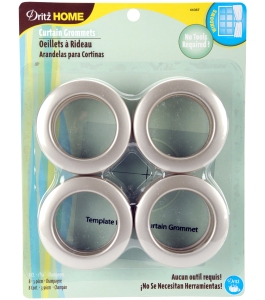 things at Joann’s, too. 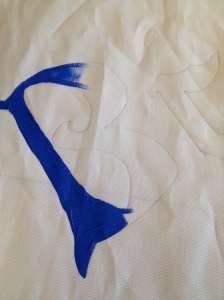 I did some measuring and cutting, a bit of straight sewing, and then I painted…

I pulled some examples of “piratey” letters from the Intertubes, and penciled on a skull and crossbones that wasn’t too scary… Lunchbox is only five, after all!

I think it turned out pretty well, and really didn’t take long. The hardest part was the pirate ship, and I swear I probably put this project off for weeks just thinking about how I could do justice to the awesome example I wanted to follow. I ended up freehanding a small version while looking at the picture from Lime and Teal, and then sized it up by drawing a grid over my drawing, drawing a grid on the wall, and replicating what was inside each block. (You learned how to do this when you were a kid, right?) Like this, but I don’t do the math part. 🙂

Anyway, are you ready for the big reveal? Here are my “afters”! PS. I was just getting the hang of the fisheye…apologies for my crappy photography. I’m learning! 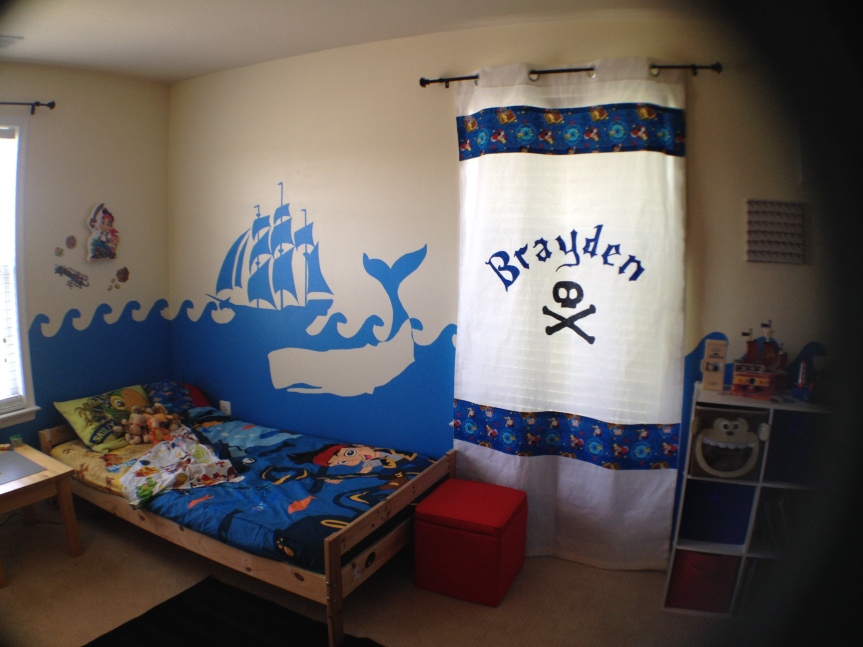 If you’re wondering what the little table is next to the bed, it’s an IKEA Lack table with a Lego board glued to the top. Tiny Lego project table! 🙂 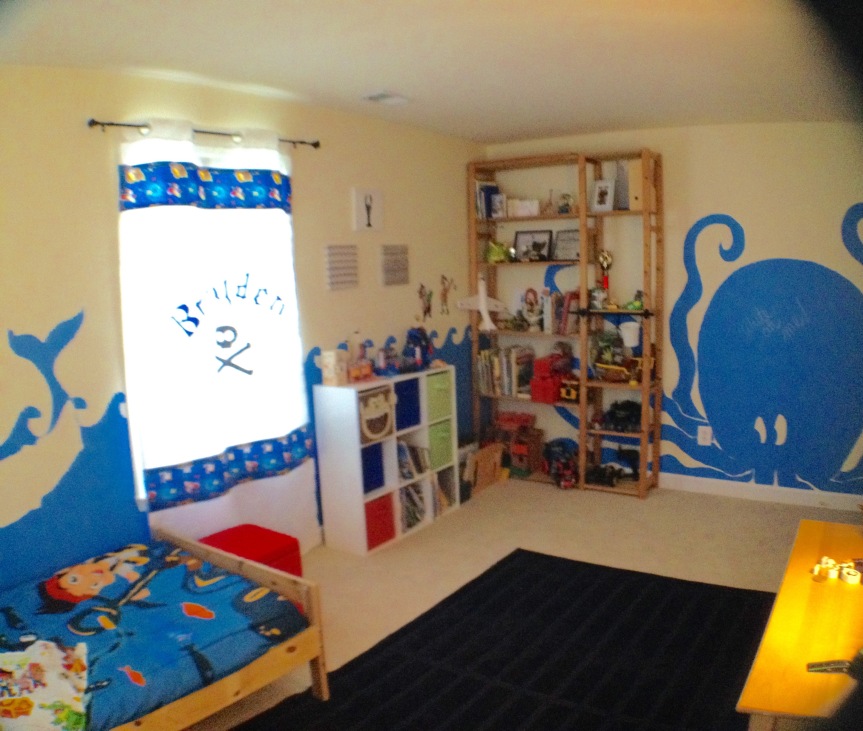 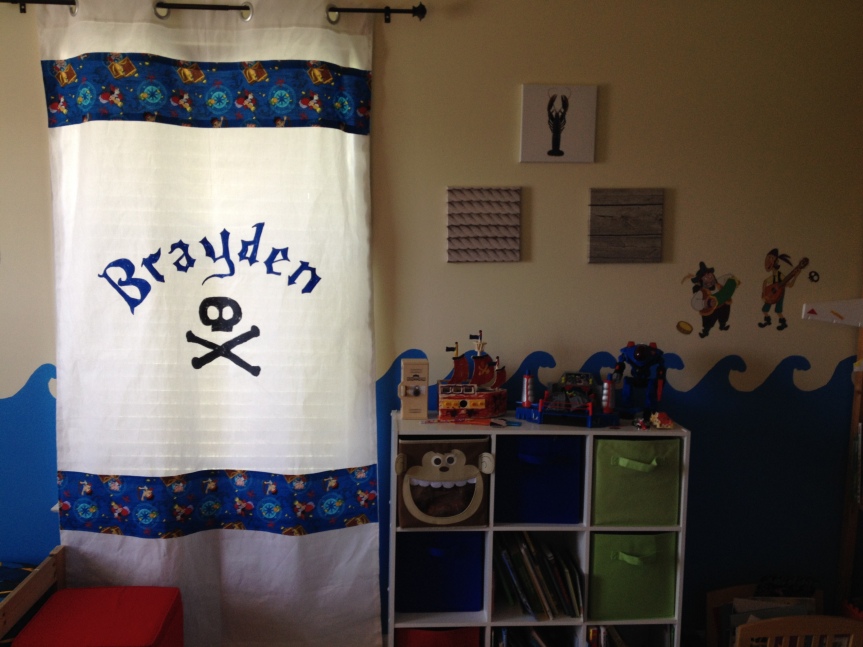