Ergh. I think I have buyer’s remorse. I was so charmed by my own stenciled wall that when I went to find curtains, I might have gone overboard. Grey, I went in saying. I just need some light-blocking simple grey panels.

But then I saw these… 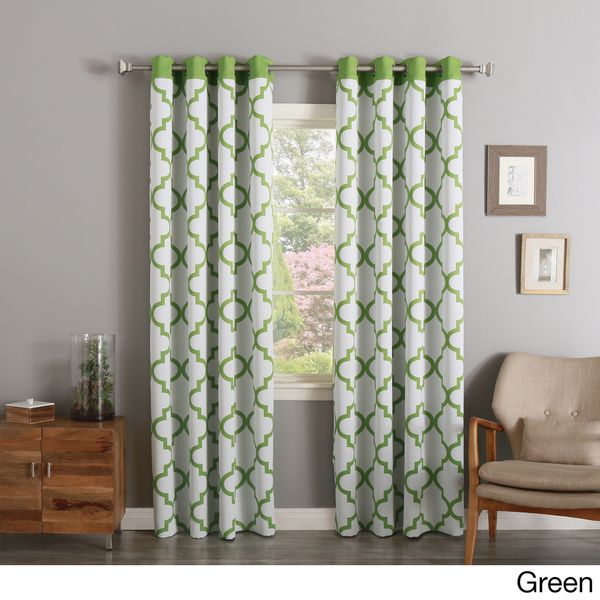 And I pulled the trigger. They were at Overstock! On sale! And so green and trellisy…

But next to this?

Maybe too much. Someone hold me. It’s too much, isn’t it? Tell me it will be okay. No, no, I know. Plain grey would have been so much better.

They come later this week. I’ll figure it out then. Stay tuned…I know you can hardly contain the excitement!

What the hell was I thinking? In about two weeks, the guest room will need to hold an actual guest. So today I decided it should get painted.

In fairness, I decided this a while ago if we’re going to get technical. And then I procrastinated.

Cuz that is what I do.

Remember the headboard? That is still attached with just one screw because I had some, uh, issues attaching it? Well, it makes it significantly harder to get the bed away from the wall to paint. Because of the not-being-attached properly thing. And also just because it is bigger. And more unwieldy. And stuff.

So here’s the plan — I’m taking the green paint that the hubs wouldn’t let me use in the front room, and stenciling it on the wall behind the bed. (this despite my previous stencil FAIL, which I have not posted because it is part of the dining room debacle, and that will be several posts, and did you know it is Christmastime??) But I can’t do the feature wall until I’ve repainted the whole room my favorite neutral Navajo White… and that’s really no fun at all, painting neutral. So I’ve put it off. Like forever. But this weekend? We’re getting some white on up in this place.

I know. It isn’t exciting, no matter how you talk about it. I’ll post the exciting photos of the white walls when I’m done. Yay.

(I did, however get to do some caulking where the trim had separated from the walls, and that is always fun. Mostly because of how you get to talk about it later at work. I like to tell people, “so last night, I was playing with the caulk up in the guest bedroom…” Use your imagination. “I’m a master of caulk,” I say. “You have to just smooth the caulk out, in just the right way…” you get the idea… Sorry.) Okay, signing off now. Apologies all around.

I’ve hated our guest room for a while. We’re still using curtains that were here when we bought the house… and the walls are just blah… and it just doesn’t have much personality. It’s a nice little square room with lots of light, and a big closet. And right now it doesn’t scream “welcome!” But I want it to. I’ve been thinking about what to do in there for a long time.

And I’m still not sure. But I’m thinking about navy blue with pink and yellow accents. And gray. Is that too much?

In the meantime, I saw this headboard at Joss and Main and couldn’t help myself… it’s pretty neutral. Gray, though… It arrived last week and I was super excited. And way too busy to put it together. (Why did the fact that assembly was required surprise me?)

So recently, after some pumpkin farm shenanigans, I set to work. Lunchbox helped by manning the allen wrench. And the assembly was a piece of cake!

And then we went to put it on the bed. It attaches to the metal bedframe with two screws on each side. The holes are pre-drilled through the upholstery of the headboard, and so naturally I assumed there would be no problem attaching it properly to the bedframe. And our frame did have two screw hole slats in exactly the right place! Huzzah, I thought (prematurely, of course.) The screws were too wide to fit through the narrow metal hole. I tried. And tried some more… and realized that there must be a tool in the Major’s well-stocked garage that would certainly enlarge a metal hole. Some kind of drill, I thought. Some kind of file slash drill bit thing, right?

Whatever this sharp saw bit thingy is for, I can tell you…it’s not for enlarging holes in metal. It did work, however, on the one hole I ruined it in. 🙂 So that was a small win. I’d replace this for the Major but I seriously don’t even know what it’s called. I guess I can take it to Lowe’s with my hangdog look and ask them for another whatever it is.

Since the Major still wasn’t home, and I can’t stand leaving things not done, I decided that shoving the bed up against the headboard would work for now. So here is the not-really-yet begun guestroom. (or at least here is the bed!) 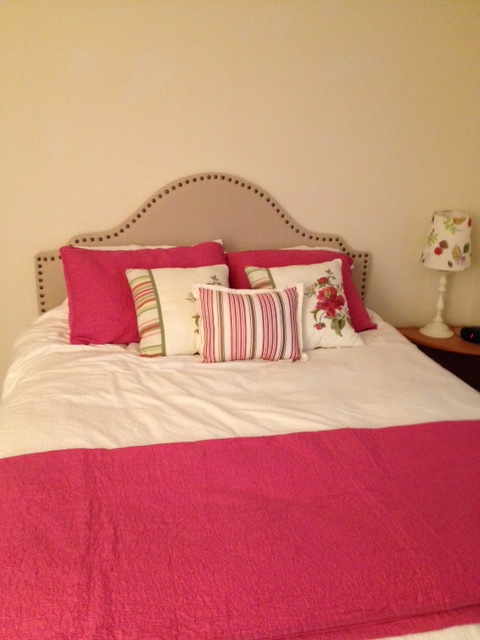